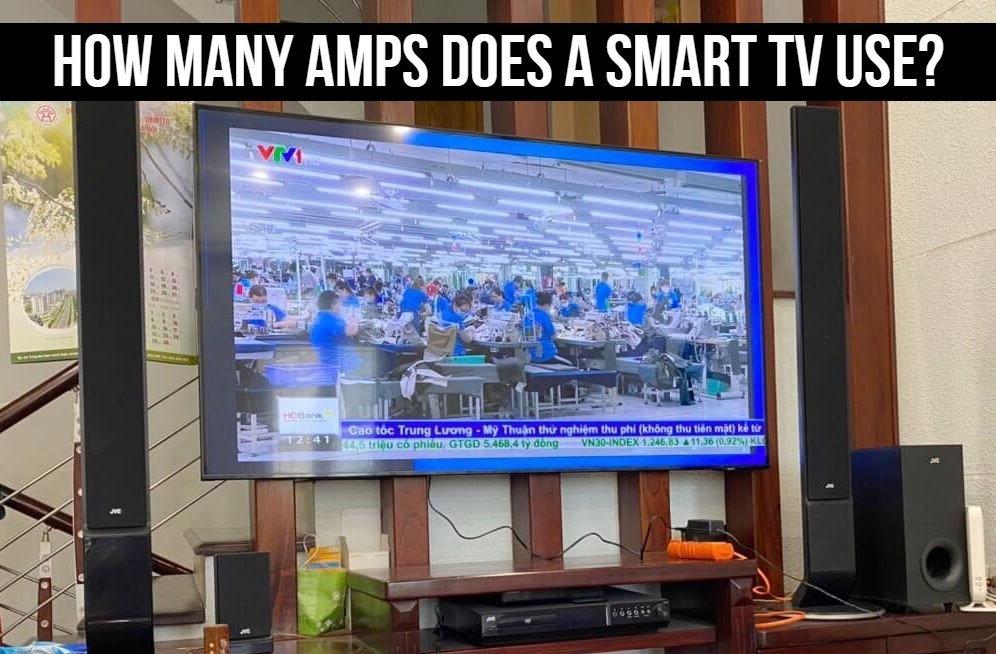 Smart TVs have a reputation for being energy-guzzlers, but that’s not always the case. That’s because your TV’s energy efficiency is determined by the number of amps it uses, which varies from model to model.

If you have a large television, you’re probably concerned about power consumption. In fact, if you have a big screen, you might even be wondering what can be done to reduce the amount of electricity it uses.

The good news is that there are many things you can do to minimize power consumption with your TV set. But the most important question is “How many amps does a smart TV use?” The short answer is “it depends”.

However, there are a few different components that contribute to the overall power draw of your television, and some of them are more significant than others. Let’s dive in and find out more about how much electricity your new “smart” TV uses.

What determines How Much Electricity a Smart TV Uses?

The amount of electricity a Smart TV uses is determined by a number of factors discussed below:

HDR technology, which has been available for a few years, has the potential to significantly increase the electricity used by a Smart TV.

Thus a TV with HDR technology will have a higher resolution and will use more electricity compared to one that doesn’t have this technology.

The more time you use your Smart TV, the more electricity it uses. Most TVs are not switched on continuously but only when they are being viewed.

This can vary greatly from one TV to another, so it is not possible to determine the precise amount of electricity used per hour.

Smart TVs use various types of technology including LED, LCD, Plasma, and DLP. The type of technology used is also a major factor in determining how much electricity a TV uses.

Each feature in a Smart TV can be considered as a power consumer so the more features the Smart TV has, the more electricity it will use.

Most Smart TVs will have a fairly standard set of features including a set-top box, a remote control, an internet browser, some apps platform, and a web browser.

If your TV has a high-definition display, a 4K or 3D screen, or other features such as a built-in DVD player or Blu-ray player, then it will use more power.

What Are The Biggest Amps-Eating Culprits on Your Smart TV?

Mentioned next are the biggest amps-eating culprits on your Smart TV:

If you’re watching video on your TV, chances are you’re using streaming apps like Netflix or YouTube. These apps eat up the most data on your TV. They consume a lot of power and are responsible for the high load on your TV’s power supply.

The cable box that comes with your Smart TV has a significant impact on the performance of your TV because it’s the largest, most powerful amplifier in your system.

If you’re using an HDTV with a built-in cable box, you’re going to be up against some serious amplification power. In addition to that, when the cable box is turned on, it will automatically use all of your TV’s processing power.

The most power-hungry gaming console systems on the market today are the Xbox One, PlayStation 5, and Nintendo Switch.

While they have the most powerful graphics card, they also do have a very powerful CPU that runs on a quad-core processor and are known to have a very high demand for electricity.

Gaming consoles are known to use a lot of RAM, as well as the CPU and GPU, making them the biggest power consumers in your Smart TV.

What’s The Best Way To Save Power On Your Smart TV?

There are a number of ways to save power on your Smart TV. Given below are some of them in detail:

1. Turning it off when you’re not using it

This is an obvious and fairly easy way to save power on your Smart TV. Just make sure you have it turned off when you’re not using or watching it because otherwise, it will be consuming power without purpose.

You can set up your TV to turn off automatically after a certain period of inactivity, or you can choose to have it turn off when you close the Smart TV remote.

2. Turning off the smart features you don’t need

You can turn off the Smart TV features that you don’t use, such as streaming apps, widgets, smart search, etc.

The advantage of this approach is that you can still use the TV, but you won’t be wasting power on things you don’t utilize.

When you are watching something like a movie, the brightness of your Smart TV can be set to different levels.

You can use the function menu on your remote control to change the brightness level according to your desire. However, by adjusting the brightness, you can save up to 20% of your electricity.

4. Turning off the backlight

Many Smart TVs have a backlight that can be turned off by pressing the button for it.

It is the light behind the TV screen. The more you use the backlight, the more power your Smart TV will be using. So it’s better to turn it off.

The energy saver mode is a function that reduces the power consumption of the Smart TV. In this mode, the display will dim, and the backlight will be turned off.

This is a system-wide power-saving mode that will turn off your set-top box, the audio-visual processor, and is triggered by pressing the standby button on the remote control.

There isn’t the best way to mention that can assist you in saving power on your Smart TV. But following the above-mentioned points can be a great deal if you want to save power and lower the electricity consumption of your TV.

The number of amps used by your Smart TV can add up pretty quickly, especially if you’re streaming movies and videos on it.

Smart TVs have a lot of energy-guzzling features. One of the most obvious ways to reduce your electric bill is to turn off your TV when you’re not watching.

A more advanced solution is to use a power monitor app. There are many apps out there that help you conserve power.

Which ones do you think work best? If you have any other tips for saving energy on your Smart TV, share your thoughts in the comments section below. Thank you, guys.